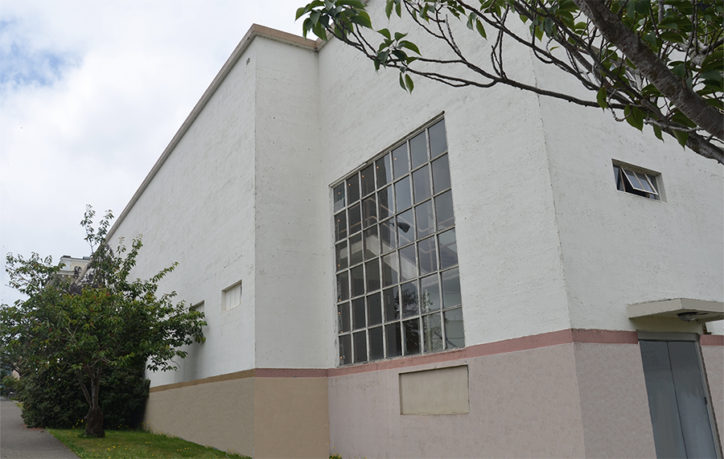 A group of Friends have big ideas for the Astoria Armory
By Edward Stratton
The Daily Astorian
Published on September 17, 2015 9:41AM

Since opening last summer, the Astoria Armory has housed everything from skate nights, an indoor skatepark, futsal indoor soccer and a roller derby team to a mayor’s ball, photos with Santa, the Columbia River Symphony and even the Goondocks in June.

The Friends of the Armory, which has powered the building’s resurgence with more than 7,000 hours of volunteer time and recently acquired nonprofit status, is preparing to buy the Armory and take it to the next level.

The Friends, represented by board president Bruce Jones and board member Dan Stein, came before the Astoria Planning Commission Wednesday night and easily

obtained a conditional use permit, an official formality to allow the Armory to continue as is.

“We’re trying to provide a venue for any community program … no matter what the demographic is, what the constituency,” Jones told the Planning Commission, adding the Friends have made great progress toward turning the building into a vibrant community hub.

The Armory faced zero opposition from the audience, city staff or the commission, besides securing off-streat parking, waste disposal and recycling and keeping up landscaping. Sean Fitzpatrick, a commissioner and founding member of the Armory’s board, recused himself.

There was probably a conditional use permit submitted in 1942 for the Astoria National Guard Armory, interim City Planner Mike Morgan said. But no permit could be found, so the city had to issue one to make the return to the Armory’s original use official.

Craft3 acquired the Armory from the Columbia River Maritime Museum, which was using it for storage since the early 2000s. They leased it to the Friends for $1 a year and handed the group the keys in June 2014.

Walt Postlewait, a chief lending officer with Craft3 speaking in support of the Armory Wednesday, said the financial firm leased it to the group for two reasons: to find out whether the community wanted an armory, and whether it needed it.

Armory volunteers put in more than 1,000 hours cleaning up the Armory after Craft3 bought it, and a few weeks after getting the keys, Jones said, there were 500 people in the stands watching a Shanghaied Roller Dolls bout. Jones said the Armory has had more than 175 events since then, with some of the revenues supporting free medical and dental clinics. And the Friends, he said, had calculated about 7,000 volunteer hours in the first nine months.

Craft3 is preparing a mortgage for the Armory, which it had previously offered to the Friends for $250,000, and a loan to help with capital improvements.

“What we’re doing is creating a community center,” Jones, former commander of local U.S. Coast Guard forces, said during a recent tour of the building. Joining him was Stein, a recent addition to the board with a background in real estate brokerage.

Groups can lease the building for $700 a day, and the Friends also lease out smaller rooms for events, such as birthday parties.

Built for large USO shows during World War II, the Armory spans 40,000 square feet over two floors and a third-floor mezzanine, all under a unique Dutch-style lamella roof, criss-crossed with arches. In its heyday, the Armory held up to 3,000 people for a speech by Vice President Richard Nixon to concerts with Bop Hope, the Camel Caravan, Deep Purple, The Zombies and Buffalo Springfield.

In the 1990s, the Clatsop Christian Church held services and skating at the Armory. But by the 2000s, there were only relics being stored on the gym floor and in the climate-controlled basement by the Maritime Museum, along with what Jones described as 25 years of accumulated pigeon poop volunteers had to clean up.

The Friends have stayed in the black through events and all the donated labor and materials, Jones said. But to better market the Armory, he and Stein said, improvements are needed.

The northern entrance to the Armory, currently a 20-foot drop to the sidewalk, needs to be rebuilt to provide an extra access point. The Friends also want to make the bathrooms at the Armory Americans with Disabilities Act-accessible; build a commercial kitchen in the concession stand to earn more revenue selling food; refurbish and make operable the rusted, rustic windows atop the gymnasium to improve air flow and tear out the carpet in the lobby, refurbishing the hardwood floors.

The Armory can hold about 750 people. The improvements could conceivably increase the capacity of the Armory to historic levels. The Friends’ comfort zone, Jones said, is about 1,500 attendees at an event. The Seaside Civic and Convention Center can fit up to 1,200 people in theater seating throughout its two main rooms.

Stein said the Armory and Liberty Theater board have an agreement to not compete. “They promised us no roller skating at the Liberty, and we promised them no operas here,” he said.

The Armory aims to be a cornerstone of downtown and an economic driver, Jones said, and the Friends hope more events will help them hire employees to join Events Coordinator Robyn Koustik, the Friends’ lone employee.

“We see this as the best outcome for the community,” Postlewait said of selling the Armory to the Friends, adding Craft3 is not making money on the deal.

But from the thousands of volunteer hours and all the events, Postlewait told the Planning Commission Wednesday, the Friends have proven the community needs and wants the Armory.